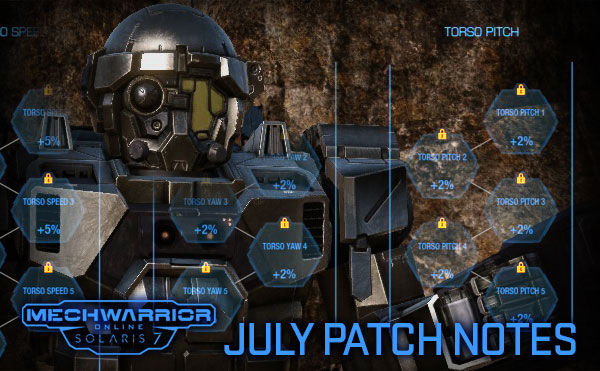 July 2022 Patch Notes
Patch Date and Time - July 19th 2022 @ 10AM – 1PM PDT
Version Number: 1.4.265.0
Size: 485 MB
Please note that due to compression differences the Steam patch size may be larger than the standalone client patch size.
Patch Files (Direct Download) - http://patcher.mwomercs.com/patch/Production/frontend/FrontendPatch_405.zip
Greetings MechWarriors!
Last month brought you a new 'Mech and a new Map, the Crusader and Vitric Station. We hope you've been enjoying the new content, and don't forget you still have until the patch tomorrow morning to take advantage of the Crusader Early Adopter Rewards!
This month we have the new Platinum Collection 05 'Mechs (will be added to store with patch), including the Commando, Centurion, Orion, Marauder II, Adder, Shadow Cat, Timber Wolf, and Supernova! Be sure to watch out for the next Platinum Collection Event to follow! Also included in this patch are another round of 'Mech Quirk Adjustments, Weapon Adjustments, Skill Tree Adjustments, and Bug Fixes!
These updates are subject to further balance changes in the future, so get out there and do the science, and get us your feedback for future iterations.
And now, we really hope you enjoy the patch!
-The MechWarrior Online Team

(Will be added to store with patch.)

As a continuation of our assessment of weapon performance, the following change has been made:
BALLISTIC WEAPONS
IS Gauss Rifle:

In this patch the following changes have been made to Skill Tree nodes: